Hiking along the Roška trail 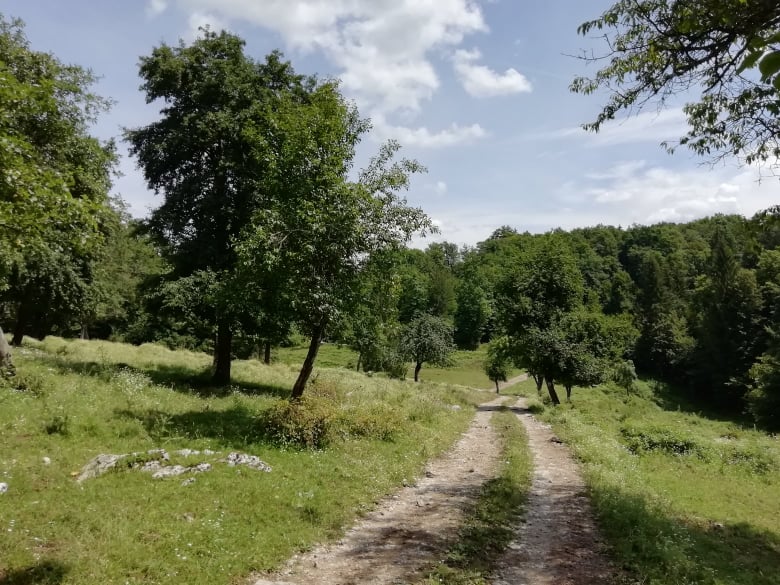 Remote nature has never been as appealing a holiday destination, as it is in the current pandemic circumstances, when we try to keep the distance even when we take a break from work. As such, the UNESCO-inscribed beech forests are now experiencing increased visitor pressure. However, very often there are forests nearby the inscribed ones, demonstrating similar or same characteristics and are better equiped to handle visitors. However, visitors often refuse to go there as they do not have the UNESCO brand. So I decided to see for myself how one of those alternatives work. Enjoying the solitude and greeness, I have embarked on a three day hiking adventure by foraying into the deepest Slovenian forests in Kočevski Rog.

Kočevski Rog is a karst plateau in the Slovenian Dinaric Alps, with the highest elevation of 1099 m. The area is almost entirely forested with some of the densest and most vital carnivore populations and often troublesome history, that is not well known nor visited. Within these forests virgin forest Rajhenavski Rog and a number of other forest reserves persevere, which also include important remnants of primeval Illyric beech forests, just like the UNESCO-inscribed Virgin Forest Krokar represents in the same region.

The Roška Trail is a long-distance, 64 km long trail that takes you from Kočevje into the depths of the forest to uncover some of its secrets. The trail is well and clearly marked and divided into three stages each about 20 something kilometres long. Given the remoteness of the region, the large bear population and uncomfortable recent history, it is not well traversed and there will be few if any people encountered during the hike at all.

The trail led me from Kočevje, the main urban centre in the region, past the villages and meadows that are exceedingly encroached in forests towards the unbroken forests of Kočevski Rog, where beech and fir still reign. The path progresses through different forests, demonstrating consequences of past management with spruce plantations and altered tree composition. Before long, a curious sight occurs, fruit trees and grape vines intermixed in the forest and meadows, devoid of most human activity or constructions, right in the middle of the forest.

These are remnants of the Kočevarske villages, where during the Middle Ages, the German-speaking people were intentionally colonising the region and establised a number of villages througout Kočevski Rog. Most of their inhabitants fled to Germany at the onset of the World War II, the villages were burned down by the Italians, and whoever remained until the end of the war, was persecuted by the newly established socialist regime in Yugoslavia. The awesome power of nature is evident, as now,  only 80 years after these events, there is practically nothing left to indicate centuries of human presence in the area. The forest reserve Pugled-Žiben is an impressive example of the extraordinary succession of the temperate forest ecosystem, where apart some ruins, it quickly becomes impossible to distinguish between ruins and piles of limestones poking through the ground in any case. The reserve was established specifically to allow studying of unhindered natural regeneration and although subtle, the amount of progression to date is staggering.

While bear encounters are not common, the high population density and very few people around also mean that crossing the paths with them is likelier in this region than elsewhere. It would be impossible to miss the tracks and bear paw imprints in the mud. However, I was especially lucky to also see a small bear family, a mother with two cubs fleeing from me. Since I come from a more urban environment and tend to spend time in nature where carnivores are very rare, I was initially hoping to avoid meeting bears in the forest, while on my own, as honestly despite knowing that they are not dangerous to people, that does little to assuage the fear instilled in me. Nevertheless, while being starled by seeing them, I was surprised at how little fear was actually involved on my side during this encounter, which goes a long way to show just how much of our fear of carnivores is based on preconceived notions, while seeing them in nature reacting to us, leaves a completely different and much less threatening impression.

The second day of the hike keeps to the deep forests, climbing to the summit of Veliki Rog, the highest point of the plateau, where the view from the viewing deck extends over seemingly endless forests in all directions. I have to admit that I generally prefer high Alpine vistas with rugged peaks piercing the sky and yet the quiet beauty of the view of extensive forests, dissapearing into the distance in soft blue undulations, brought unexpected deep satisfaction within me.

The Trail then leads into the forest reserve Rog and at the edge of Virgin Forest Rajhenavski Rog. The latter was also considered for inclusion in the 2017 nomination dossier as part of the extension of the World Heritage properts Ancient and Primeval Beech Forests of the Carpathians and Other Regions of Europe. However, due to its smaller size it was decided that Virgin Forest Krokar should be inscribed instead. The virgin forests are strictly protected and no entry into them is allowed. The Trail thus circles around the forest reserve, however the experience of the wild beauty of the area is unhindered as the virgin forest remnant is situated within a larger forest reserve where no forestry or other interventions are allowed. Therefore, the hike along this part of the trail requires clambering over countless fallen trees, massive snaking roots, and moss-covered limestone outcrops. The experience of the primeval Illyric beech forest for a visitor is thus much more visceral here than it is at Krokar forest reserve.

The last hiking day slowly brings you out of the forests and back into the civilisation. The Trail passes another small forest reserve – Prelesnikova koliševka, which offers a glimpse into a special world of a karst freezing depression, which affects the vegetation composition and allows for a natural spruce forest which would not be naturally found at such an altitude otherwise. Further along the Trail there is another brush with history, more recent and more unpleasant, however for the same reason that much more important to be remembered. The Kočevski Rog was the stronghold of the partisan (guerilla) forces during the World War II and following the end of the war the place of mass shooting and disposal of the people who supported the losing side during the war. Hundreds of people lost their lives in these forests and were disposed of in the depressions, caves and abysses, with many still undiscovered. These events are recent enough to be influential in current politics still.

The final stretch offers a glimpse into the destructive forces of nature. The forests in vicinity of Kočevje which were ravaged by windbreaks and bark beetle outbreaks in recent years to such an extent that often entirely open spaces replaced forests. The areas are left to natural regeneration under the care of foresters to allow the forests to regrow without much additional planting.

While the entire Roška Trail offers great insights into both natural, cultural, and historical heritage of the area, it is also long enough that only truly dedicated visitors will undertake it. Nevertheless, individual sights and reserves along the way can also be visited in the form of day trips and can represent a great alternative to the more sensitive and less accessible forests, such as the Virgin Forest Krokar. Ultimately, the UNESCO-inscribed Krokar is a very small part of a truly extensive forest complex of Kočevsko region, which covers tens of thousands of hectares. The UNESCO recognition of the Outstanding Universal Value of Krokar is by extension the recognition of the excellence in the forestry management in Slovenia as a whole. Slovenian foresters recognised the value of primeval forest remnants and ensured their protection, while managing the rests of the forests in a close-to-nature way, which now allows both biodiversity protection and exploitation in a sustainable way in all Slovenian forests. Therefore, sometimes visiting even some of the forest reserves without the UNESCO brand can provide a fully rewarding experience, without needlessly endagering the sensitive forest ecosystems.

One thought on “Hiking along the Roška trail”

Do you care about the Nature and Beech Forest like we do? Get involved!
Become A Volunteer